Today’s Throwback Thursday post goes out to our most recent Grand National Champion, Tarpon Springs H.S. Last year, 2014, was a magical year for Tarpon Springs, as they won their first ever title. Their show titled, “Man vs. Machine” was full of energy, musicality and was visually engaging. While watching their Prelims, Semifinals and Finals performances, I was able to catch a new aspect within each run of the show.

Tarpon Springs H.S. has a rich history in attending Bands of America events. They first broke into Grand National Championships Finals in 1997 placing 4th and in 2000 when they placed 3rd.

What I love most about this band is the interaction I’ve had with its student musicians last season. In uniform, they were all business, but underneath the shako, guard makeup, and uniforms were ordinary kids with extraordinary talents. They were humble and understood the joy they could experience performing with their friends.

Good luck to all the bands performing at this year’s Bands of America Regional, Super Regional and Grand National Championships. 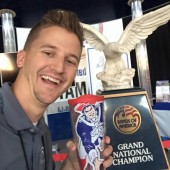 The Sound of Music and Music for All = A Winning Combination The Intersection of Aesthetic Criteria and Personal Taste Leading With Marbles at the Drum Major Institute